How Trump can top 'American carnage' 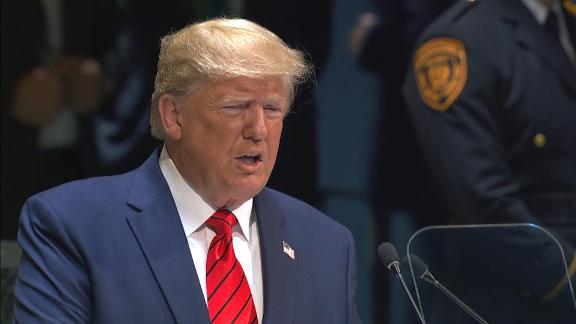 During his remarks to the United Nations General Assembly, President Donald Trump urged countries to enforce their borders and said that undermining border security is "undermining human rights and dignity."

President Donald Trump shocked many in his inaugural address by using the phrase "American carnage," speaking of "abandoned factories, rampant crime and a failed education system." And today, at the United Nations, he said that the "The future does not belong to globalists. The future belongs to patriots."

These kinds of comments tend to shock the "permanent political class," which the President also derided today. Whether you love or hate Trump's blunt force rhetoric in these settings, the next American president, no matter who wins in 2020, should be looking for a messaging transition back to America's traditional role as a force for good in the world.

In this spirit, I submit a framework for the next inaugural. There's nothing unpatriotic about believing in the ability of America to strengthen itself at home while influencing and encouraging people the world over to tilt toward human freedom and liberty. We must reconcile and bridge the President's powerful call for patriotism with the reality that a world without American influence is a worse place to live.

Here's what I think Trump should say if he is reelected. Or what his Democratic opponent should say, if victorious:

Good people can still be ornery from time to time. Americans, like all humans, are fallible. We make mistakes and say things that we come to regret, but it is usually born of a desire to achieve a good outcome. There's an orneriness embedded in the soul of every American, rooted in our history as explorers, pioneers, farmers, inventors, soldiers and laborers. We are not conformists, but our independent streaks do not prevent us from collectively working together to change the world.

Even in our orneriest moments, somewhere deep inside all of us is a view that -- as Americans -- we carry a personal responsibility to be a force for good in the world. For most of us, that force comes in small acts -- the monthly donation to churches and charities, the volunteer hours spent at a local homeless shelter and the other countless acts in which Americans engage that make an enormous difference in lives the nation over. American goodness manifests itself in our communities every day; lives are changed and touched through simple acts of charity and kindness.

Americans collectively have the capacity to do big things. Wonderfully big, audacious things that change the world as we know it. President George W. Bush knew this when he crusaded to eradicate HIV and AIDS on the African continent, saving millions of lives. Secretary of State George Marshall knew this when he conceived of the plan to rebuild Europe after World War II.

Bush. Obama. Reagan. Kennedy. Truman. Presidents in both parties knew the value in spreading American influence and values in our world. It is in our national security, economic and moral interests to be as engaged in the world as possible.

And in the things those presidents accomplished -- along with so many others --- we projected America's goodness as a stabilizing humanitarian force that saved lives and lifted people out of poverty. Every person -- and especially every child -- impacted by those interventions, when they encounter an American flag for the rest of their lives, knows and believes in the essentialness and power of America's fundamental goodness.

In a dangerous world, we need more people looking up to the Stars and Stripes as a symbol of hope and freedom, and fewer looking down on it as a fabric to be burned and discarded. Some will never appreciate the power of freedom and human liberty to unleash the full potential of humanity; no matter, it is in our best interests to spread that message to every ear in the hopes of finding the ones that believe.

Promoting American goodness is not binary -- we have the luxury of not having to choose between domestic and international priorities. Our toxic politics attempts to frame most issues as an either/or, and this has shaped the perception of American goodness around the world. "Why should we do for others when we need to do more for ourselves?" people ask.

It is not an illegitimate question. It finds its roots in the failures of the political and cultural elite to listen to the American people. Those asking the question are not to be mocked or dismissed; they deserve an answer. And here it is -- reject the false, binary choice.

America is too big and too great to be limited. Rebuff the shackling of American goodness as it is misconceived and believe in America's unlimited potential, wherever our values can be spread. From the inner cities of our largest urban areas, to rural Appalachia, to the most remote villages of Africa, the collective power of Americans to make a difference only adds to the strength of a nation that has been the light of the world for over 200 years.

There is no reason America cannot improve the condition of its own people while simultaneously extending relief and advancement to others around the world. A stable world, full of American influence, is better for our future than a world in chaos and under the influence of hostile competitors.

American goodness does not mean unaccountable spending or crusading. The American people are charitable but should not be expected to give up the right to know how their dollars and goodwill are being spent. Transparency is essential; after all, how can we know whether we are getting the results are nation desires if we do not track and account for the dollars and outcomes?

Believing in American goodness will help bridge the divides that plague our politics. Urban vs. rural. Those with college degrees vs. those without. Men vs. women. Whites vs. minorities. Old vs. young. We have been pitted against each other by politicians in both parties for far too long. We must rediscover and strengthen the ties that bind us all together. And the strongest of those ties -- the fundamental view that America is a force for good in this world -- must be rekindled now.

Nothing will make us feel better as a nation than to know our prestige is growing worldwide. Throughout our history, as we've saved the world from tyranny, landed on the moon, pioneered cures for deadly diseases and fed millions, Americans became convinced that God ordained our nation to achieve these big things. To serve our fellow man, in the pursuit of a more stable American nation.

And so it shall be in the future. As we project American goodness, we do it because it is the right thing to do. Not just for the rest of the world but for our own people -- those who died to defend this nation, those who built it, and those who are yet to come.

Life in prison sought for man in Indiana dismemberment case

Record breaking pumpkin grown and on display in the Wabash Valley

Stepping up to help people with substance use disorder

Record breaking pumpkin grown and on display in the Wabash Valley