Donald Trump isn't up to the job 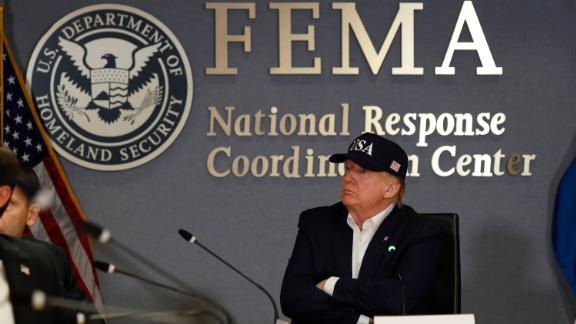 Hurricane Dorian spent much of the weekend stalled over the Bahamas, where it ceaselessly battered the islands with 110 mph winds and inundated it with floodwaters, destroying homes and livelihoods. At least five people died. Forecasters say it could turn towards the East Coast next.

While the country prepared for what could be a devastating natural disaster here, should Dorian hit the US, President Donald Trump tooled around on the golf course at his club in Virginia this weekend, tweeting 122 times since Saturday morning, according to the New York Times.

He tweeted about the hurricane -- much of it real nonsense -- but also self-congratulating posts about the economy and jobs, laudatory shout-outs from Fox News, slams of the media, and beefs with political opponents and others.

A President who goes golfing as a hurricane bears down on the East Coast of the country is highly questionable at best, but it is predictable from a man who has spent nearly as much time on the green as in the Oval, and who seems to have little interest in actually doing the work of running a country.

The tweets, too, are not out of place from a man with such itchy thumbs. But they are concerning nonetheless. They point to a President who appears for all the world to be slipping; a man whose empathy is absent and who obviously lacks intellectual understanding of basic concepts.

On Sunday, Trump claimed, for example, that Dorian could hit Alabama; the Weather Service says that's not true. After the Weather Service corrected the record and said Alabama isn't threatened, Trump made the same claim again -- and again. He accused his own weather service of issuing a phony report.

Trump doesn't seem to understand what a Category 5 hurricane is, tweeting on Sunday, "A Category 5 is something that I don't know that I've even heard the term, other than I know it's there. That's the ultimate." I know we're used to bumbling and rambling from this President, but those two sentences make no sense. They are entirely and shockingly incoherent.

He then claimed that weather experts also had never heard of or experienced a Category 5 hurricane. This claim is as bizarre as it is demonstrably false. Note that both Hurricane Irma in Florida and Hurricane Maria in Puerto Rico -- occurring in the first year of his presidency -- were Category 5 storms.

The President's ignorance and his antics aren't funny or entertaining. They are worrying and potentially deadly.

Trump has proved again and again that he is unfit for the office he holds. He does not understand basic information he needs to do his job. He does not seem to understand that lives hang on how he executes his role. Instead, he's more concerned about his golf game and Mar-a-Lago.

This is an emergency -- Dorian, clearly, but Trump too. And yet the Republican Party is more interested in hanging on to power than in putting someone even mildly competent in office. But here we are.

As our climate continues to change, scientists tell us that hurricanes are going to become more frequent and more devastating. We need an executive in office right now who can manage the fallout. Instead, we have a greedy simpleton in a golf cart.

More than two years after Hurricane Maria touched down in Puerto Rico, the island still hasn't recovered, and the President doesn't seem to know whether Puerto Rico is part of the United States or not (or where it might be located). His incompetence and indifference have left lives upended there. And he has demonstrated no interest in learning or caring more, even when Americans on the mainland are threatened. We get nonsense, word-salad tweets instead.

We get a President who can't seem to focus long enough to listen to his own weather service on where Dorian may hit, who tweets warnings to "be careful." How do we think he will manage the actual impact of this hurricane if it hits the United States?