Here are some of the reasons Hurricane Dorian is particularly dangerous 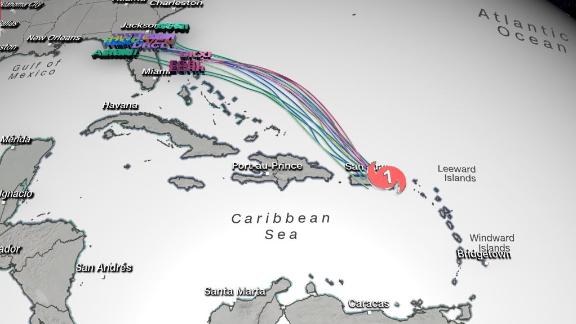 What are the top global forecast models and is one more accurate than the other?

Hurricane Dorian is scary for a lot of reasons, not the least of which is that it's expected to be a monstrous Category 4 storm by the time it gets to Florida early next week.

Winds that strong would be worrying enough, but that's just one piece of Dorian's package of threats.

With the caveat that forecasts often change as the storm approaches, here are the risks Dorian seems poised to pose:

It could be dark at landfall

"One of the worst things you can have is a dark landfall," CNN meteorologist Chad Myers said. "You hear things moving, you don't know where they came from. You don't how big that thing was that just crashed."

Forecasters predict the maximum sustained winds at Dorian's core will be more than 130 mph when it makes landfall in Florida.

That would make it the strongest hurricane to strike the state's Atlantic coast since catastrophic Andrew in 1992.

Winds of at least 130 mph cause catastrophic damage. The National Weather Service puts it this way: Even well-built homes can lose roofs and some exterior walls. Trees and power poles are snapped or toppled.

Power outages could last weeks in areas affected by winds of these speeds.

It's expected to linger. That will raise flooding threats

Dorian's forward movement is expected to slow as it approaches land, and it should remain slow over land, eventually taking a turn to the north.

One consequence of that: Dorian would keep dropping heavy rain over the same areas for a long time.

That would lead to freshwater flooding. Heavy rain is forecast over much of Florida -- as many as 20 inches dropping in parts of eastern and central portions of the state, Myers said. Coastal Georgia, too, should watch for heavy rain.

Strong winds also will batter areas over and over. The storm's core should lose strength as it moves over land, but remember, its forward movement is expected to be a crawl. As of Friday, some forecasts had Dorian still somewhere over Florida about 24 hours after landfall -- and still with low-end Category 1 winds.

Storm surges could be bad. King Tides could make them worse

With any landfalling hurricane, you'll want to look for storm surges -- winds and pressure pushing seawater onto land. In Dorian's case -- churning counterclockwise and moving westward into land -- we may see a good amount of storm surge just to the north of Dorian's landfall spot.

Dorian is approaching at an unfortunate time, as far as storm surges go. Friday marked the start of Florida's King Tides, a term that refers to the highest tides in any given period.

"The fact that this storm is hitting during some of the highest tides of the year is very concerning," CNN senior meteorologist Brandon Miller said. "The King Tides adding a couple of feet to the water height is almost like the storm being a category higher on scale."

King Tides combining with storm surges could mean people who typically consider themselves safely away from shore could, in fact, be in danger.

Storm surges north of wherever Dorian makes landfall "could easily be over 8 to 12 feet," Myers said.