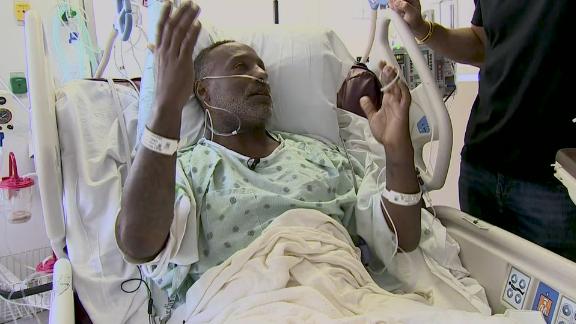 CNN's Chris Cuomo speaks to a survivor of the El Paso mass shooting who was shot after throwing bottles at the shooter in an attempt to get his attention.

Singer Khalid plans to hold a benefit concert to help those affected by the mass shooting in El Paso. And there are ways you can help the victims (both in El Paso and Dayton), as well.

El Paso came together last night, two days after a gunman brought unspeakable horror to the Texas city. People attended a handful of vigils to remember the 22 people killed when a shooter attacked shoppers at a Walmart. People like Jordan and Andre Anchondo. The young couple, with their 2-month-old son in tow, were shopping for school supplies when the shooting started. The couple was killed, but the baby survived because his mom shielded him from the gunfire. You can read more about other victims of the massacre here.

And there were stories of heroism, too, like the Walmart employee and customer who helped 140 people escape the violence. The gunman, who has been charged with capital murder, showed no remorse or regret when he was arrested, police say. President Trump, who addressed the nation about the shootings there and in Dayton, Ohio, will visit the city tomorrow. That announcement is being met with mixed reactions.

Meanwhile, in Ohio, a Twitter account that appears to belong to the gunman in the Dayton shooting retweeted extreme left-wing and anti-police posts, as well as tweets supporting Antifa, or anti-fascist, protesters. The mass shooting early Sunday morning in an entertainment district in Dayton left nine people dead. Police still haven't determined what led the gunman to kill innocent people.

Many of the people who died in Dayton were simply out celebrating milestones and achievements in their lives. Lois Oglesby had given birth last month. Logan Turner just last week had celebrated his 30th birthday. Nicholas Cumer was a week away from completing an internship at a cancer treatment center. But their lives were brutally cut short after just 30 seconds of gunfire. Click here to read more about the victims of the Dayton shooting.

A new front has opened up in the trade war between the US and China: currency. The Chinese government devalued its currency, letting the yuan fall below its 7-to-1 ratio with the US dollar for the first time in a decade. So, what the heck does that mean exactly? Just know it's not good. The move is interpreted as China retaliating after the President threatened to slap a 10% tariff on $300 billion worth of Chinese goods. The Trump administration later labeled China a "currency manipulator."

The result of all this financial gamesmanship? Stocks plummeted worldwide. Here in the US, the Dow had its worst day of the year, closing down 767 points. Today will probably be ugly, too. Asian stocks were down across the board this morning, and Dow futures don't look so hot, either. CNN Business' Matt Egan says this whole trade war is starting to get out of hand. Click here for the latest.

The US is increasing the pressure on Venezuela, big time. President Trump announced that the US would expand its sanctions against the South American nation (through an executive order) to impose a total economic embargo. The embargo freezes assets of Venezuela's government and associated entities and prohibits economic transactions with it, with a few exceptions.

The situation in Venezuela has deteriorated significantly over the past few years, with food and medicine shortages causing a humanitarian crisis that's forced many to flee. And there's a political crisis going on, too, with embattled President Nicolas Maduro and the opposition leader, National Assembly President Juan Guaido, fighting for control of the country. (Guaido is recognized as Venezuela's interim president by dozens of countries.)

Tensions are sky-high right now in one of the most militarized places in the world: the disputed Kashmir region, which is claimed by both India and Pakistan. The part of the region controlled by India was on lockdown yesterday, with prominent politicians put under house arrest, tens of thousands of new troops deployed and a broad communications blackout in effect. All this comes as India preps to change the way it runs the disputed region.

The government of Indian Prime Minister Narendra Modi said it was going to revoke what's known as Article 370, a 70-year-old measure that gives two Indian states in the disrupted region a certain level of autonomy. Revoking Article 370 would give India more power in the part of Kashmir it controls. Pakistan hates this idea and so do the opposition parties in India. Click here to read more about Article 370 and learn why Kashmir means so much to both India and Pakistan.

The prison sentence given to Cesar Sayoc, the man who pleaded guilty to sending pipe bombs to prominent Democrats and members of the media, including CNN

When a New Jersey man was in danger of losing his home, his neighbors got busy and raised $50,000 so he could keep it.

Light as a rock

Want to see a skyscraper that seems to defy gravity? You'll have to travel to Singapore to get a good look at the Robinson Tower.

Have you texted your "number neighbor" yet? We haven't either, but apparently everybody else on social media has.

Welcome to the world

Congrats to "Today" co-host (and ex-first daughter) Jenna Bush Hager and her husband Henry Hager on the birth of their son Hal.