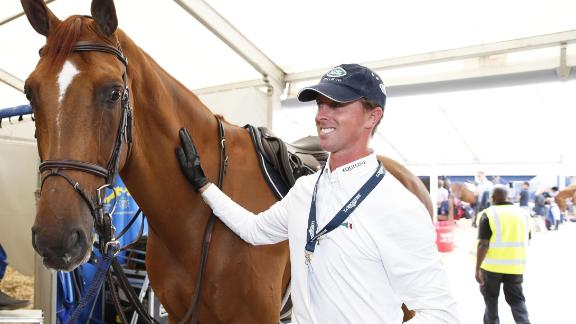 Ben Maher was about to start his first round in the Longines Global Champions Tour (LGCT) for the world's top show jumpers when the defending overall champion spotted something unusual.

"There is a rolling pole on the London jump," the Briton told the course builders as he cantered into the sandy arena at the Royal Chelsea Hospital, a stone's throw from the River Thames in London.

The pole on the penultimate fence is duly fixed, and a few minutes later, Maher qualified for the jump-off with a flawless round on his tall chestnut Explosion W.

It's the kind of attention to detail that turned Maher into a dominating force on the LGCT last season, when he took the overall title with four commanding wins.

But as every champion knows, winning is one thing, defending a big title is quite another.

This season, Maher had been winless after 13 of 18 legs on the LGCT, finishing in second place in Cascais, Portugal and Doha, Qatar, with Explosion W.

His season clicked into gear when it mattered the most: on home soil, in front of a sellout crowd in London.

A few hours after Maher and Explosion W helped win the Global Champions League team event for the London Knights, the 36-year-old crushed the competition by winning a 12-horse jump-off in the individual LGCT by a huge margin of 1.46 seconds.

"Incredible," Maher told the crowd after his victory, his first in London since 2013. "Always, the best win is to win at home."

'One of the best'

Maher, who won team gold for Britain at the 2012 London Olympics, paid tribute to his strong Dutch warmblood, saying the ten-year-old gelding is "one of the best horses in the world."

"We started the year a little slower than last year, we've had two Longines Global Champions Tour seconds and just missed out," said Maher. "Took all of the risk today, and he felt incredible. He deserved this win."

READ: Jennifer Gates -- 'Lifetime learner' on juggling her love of horses with academia

READ: "Listen to your horse, feel what they're doing" -- Pieter Devos' secrets of success

After the second rider in the jump-off, Ireland's Shane Sweetnam and Alejandro took an early lead with a clear round in 37.44 seconds, the next six riders all failed to overtake him.

The crowd went silent as Maher and Explosion W calmly entered the arena as the ninth combination.

Maher knew he had to go full throttle if he wanted to have a shot at victory and narrowing the gap between himself and the overall series leader, Belgium's Pieter Devos, who had eight faults in the jump-off.

"I saw Shane, and he was pretty fast," Maher said in a news conference after the event. "I took every risk, at every fence, and he came up in the right place," said the Briton, who finished in a lightning fast time of 35.98 seconds.

With three more riders to go, Maher looked on from the warmup arena.

With Belgian's Constant van Paesschen and Eric Lamaze of Canada, the 2008 individual Olympic champion, on eight and four penalties, respectively, the crowd held its breath as the final competitor, Ireland's Darragh Kenny and Classic Dream, put down a flawless round, only to finish in third place as they were 1.64 seconds slower than Maher.

Once it became clear he had won, Maher's team, which included his grooms, his truck drivers and his backers, the British Moffitt family of Poden Farms, celebrated wildly with him in the warmup arena.

"I have a great support team, and it's nice to give something back," said Maher, who rose to second from third on the overall LGCT leaderboard after 14 events, and now sits just six points behind Devos, who has 258 points. Germany's Daniel Deusser is third, 26 points behind the overall leader.

"Being home is worth three of any other," said Maher. "It's been an amazing day, I am very happy."

Although Sweetnam missed out on the win, his second place in London meant he qualified for the season-ending Prague Playoffs from November 21-24.

Earlier on Saturday, Maher and Belgium's Olivier Philippaerts successfully defended their London crown as they raced to a fourth win of the season with the London Knights in the Global Champions League (GCL) team event.

The pair received a huge cheer from the London crowd as they entered the arena for the victory ceremony, accompanied by members of the Household Cavalry and the red-coated Chelsea Pensioners, British war veterans who live at the Royal Chelsea Hospital.

The Knights clinched the home victory after they were the only team to go clear over a total of four rounds. Valkenswaard United were second with four penalties while New York Empire, which also had four penalties but were almost six seconds slower than United, were third.

"I didn't see the rest go, but I knew my horse well and took my time," said Philippaerts. "It really worked out well today. It was amazing in front of a home crowd, so to pull it off was really amazing."

As Philippaerts and H&M Extra watched on from inside the arena, the crowd gasped as Maher, wearing a jacket in the same bright red colors as the Chelsea Pensioners, sent Explosion W round at top speed.

The home win handed the Knights, who earlier in the season triumphed in Stockholm, Cascais and Madrid, the lead on the overall GCL leaderboard, with 258 points. That's six points clear of Miami Celtics, the only other team to score a home win this season, and eleven points ahead of St Tropez Pirates.

"The London Knights, we've been working hard all season, and hopefully now, we are gaining some momentum," said Maher.

The next leg of the regular 18-leg Longines Global Champions Tour will be staged in Valkenswaard, Netherlands, between August 9 and 11.