FDR had a military event, too 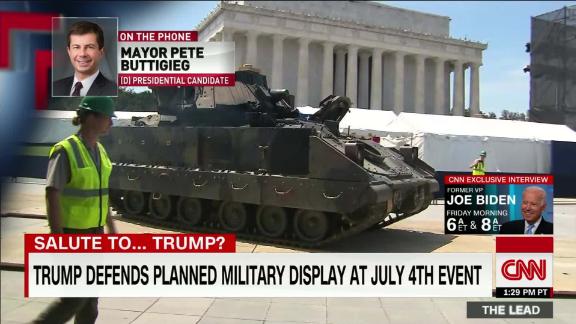 Some time ago, I was surprised to learn that Donald Trump wanted a military parade in Washington like the one he'd seen in France, and I wrote the commentary below about his childish demand for a grandiose spectacle.

More than a year later, here we are: it's the Fourth of July and the President is indeed planning to roll out tanks, stand with generals and preside over fireworks on the National Mall, at striking taxpayer expense. Though it is not a parade. That event -- America's annual National Independence Day Parade, a traditional patriotic celebration quite apart from any Trump event and replete with fife and drum, floats, balloons and dignitaries, steps off at 11:45 a.m. on Constitution Avenue.

Trump has taken much criticism for his narcissistic "event," but it wouldn't be the first elaborate military display in Washington.

"I want a parade like the one in France," President Donald Trump reportedly said to a military official, who passed that information on to The Washington Post.

Trump had been the guest of French President Emmanuel Macron on Bastille Day in July 2017, and after attending the parade he enthusiastically exclaimed that it was "one of the greatest parades" he'd ever seen. And so, he wanted to preside over an equally spectacular one in Washington -- not unlike a 7-year-old who wants his birthday party to be as big and elaborate as his friend's. It would cost millions of dollars in citizens' hard-earned tax money (money that could go instead to veterans' hospitals), and military officials said they were unsure how to pay for it.

And yet, it wouldn't be the first grand military parade in Washington. There was one in January 1941, for example, after Franklin D. Roosevelt's inauguration to an unprecedented third term in office. That past spring all the European democracies, with the exception of Great Britain, had fallen to the relentless Nazi forces, and in Asia, Japan had extended its reach into China.

It was a year before Pearl Harbor, and the nation was not yet at war, but FDR knew he would have to educate Americans and convince them and Congress that the nation must nevertheless be prepared and mobilized for war. He decided a military parade would be a dramatic display of the nation's willingness to fight to preserve its way of life and its determination to protect Great Britain from the Nazi onslaught.

And so, after his inaugural address, a grand military parade took place.

First came a platoon of Washington motorcycle police, and behind them rode Gen. George C. Marshall, the Army chief of staff, on horseback. Then came military bands, units from the Navy, Coast Guard and Marines, along with West Point cadets and Annapolis midshipmen. They were followed by scout cars, motorcycles, trucks with anti-tank guns, anti-aircraft guns, field guns and cannons. Military planes soared in formation overhead.

But more enduring and less expensive was FDR's brief inaugural address before that military extravaganza. In his speech, he explained that a nation was like a person; it had a physical, intellectual and spiritual life. Its body must be clothed, fed and housed and its mind kept informed and alert. But a nation, "like a person," he said, "has something deeper, something more permanent, something larger than the sum of all its parts." No single word could name it, "and yet we all understand what it is."

For the United States it was something he called "the democratic aspiration," a living faith, a quasi-divine purpose in national life, an ongoing quest for freedom, justice, equality, happiness. If that "spirit of America" were killed, "even though the nation's body and mind, constricted in an alien world, lived on, the America we know would have perished."

He believed that in the months and years ahead, under the threat posed by the Axis powers, Americans would need to make sacrifices to keep the spirit of America alive. They would also need to practice lives of kindness and generosity that included a sense of responsibility for others -- for the neighbors they knew as well as for the people they didn't know.

It was an important and profound speech, although there was no memorable catch phrase like "the only thing we have to fear is fear itself" that he famously declared in his first inaugural address in the bleak winter of 1933.

Perhaps we should ask ourselves if we risk losing that "spirit" of America under President Trump. A military display orchestrated merely to entertain a childish president is a futile and meaningless spectacle, unless it is accompanied by a real understanding and acknowledgment of America's vital military, moral and humanitarian role in the rest of the world.

This was the kind of essential role that America played when it became the arsenal of democracy in World War II and when, after the war, it created the Marshall Plan to restore health, democracy and prosperity to a war-ravaged Europe -- the opposite of the nativist, nationalist, isolationist and counterproductive mentality of "America First."

Name-calling, rash threats and empty displays of military prowess are no substitute for the compassion, generosity, decency and dignity that have kept alive for almost 2½ centuries the precious quasi-divine purpose of our nation. In his first inaugural address in 1789, George Washington memorably said, "The preservation of the sacred fire of liberty, and the destiny of the republican model of government are staked on the experiment entrusted to the hands of the American people."

America is still an ongoing experiment -- let us work to keep that "sacred fire" and the moral and ethical "democratic aspiration" alive.

"This is about having the choice." Over 100 protested vaccine mandates outside of this Terre Haute manufacturing facility

Just a year after a near-death accident, local businessman celebrates 25 years in business

Several facilities to be renamed after ISU Board meeting

Loogootee Volleyball Falls in the Regional Semi-Finals to Trinity Lutheran

Residents cleanup the City of Clinton