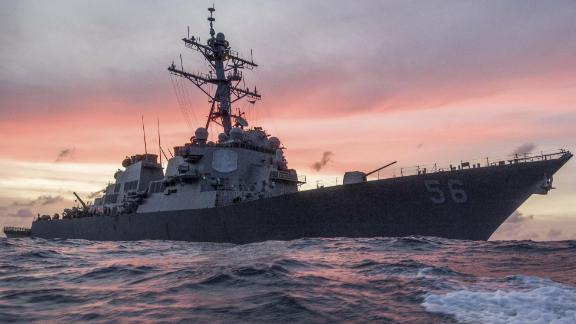 The Wall Street Journal reports that the Trump administration wanted the USS John McCain "out of sight" during President Donald Trump's recent trip to Japan, and gave the sailors on the ship a day off. CNN's Anderson Cooper discusses with Wall Street Journal writer Rebecca Ballhaus.

Here's one way to update your morning commute: Ferrari has rolled out its first-ever hybrid plug-in car (yes, it's a beauty).

And here's what else you need to know to Get Up to Speed and Out the Door.

(You can also get "5 Things You Need to Know Today" delivered to your inbox daily. Sign up here.)

At long last, we have heard from the man behind the Mueller report. Special counsel Robert Mueller made a rare public appearance yesterday to issue a statement on the findings of his report and to announce the closing of the special counsel's office. In his remarks, Mueller made it clear he did not pursue obstruction of justice charges against President Trump based on his findings because Justice Department guidelines don't allow him that option. "If we had had confidence that the President clearly did not commit a crime, we would have said so," Mueller said. "We did not, however, make a determination as to whether the President did commit a crime."

Mueller's statement undercuts the narrative of Attorney General William Barr, who has been accused of mischaracterizing the report and the Mueller team's reasons for not bringing charges against the President. It also reinvigorated talk among Democrats about possible impeachment procedures. Prominent Democrats, including several 2020 contenders, called for an impeachment inquiry after Mueller's comments, but so far House Speaker Nancy Pelosi and House Judiciary Chairman Jerry Nadler have resisted the call.

It's back to the drawing board for the Israeli national elections. Prime Minister Benjamin Netanyahu hasn't been able to put together a coalition government from the parties elected in April to parliament, so now the country will hold another round of national elections in late summer. It's the first time in Israel's history that a general election has failed to produce a government. April's elections appeared to be a huge victory for Netanyahu, but negotiations between opposing parties in Israel's parliament, called the Knesset, led to a deadlock among party leaders and all sorts of political problems for the country's longtime head of state. Now, Israeli citizens will head back to the polls in September in hopes of establishing a working political majority.

President Trump tried to do a bit of damage control after reports that the White House Military Office and lower-level US Navy officials exchanged emails about moving the USS John McCain, a Navy war ship, ahead of Trump's recent Japan visit. The vessel -- first named for the late senator's father and grandfather -- sits in the harbor on the US Navy base in Yokosuka, Japan, where Trump spoke to troops during a Memorial Day event. Obviously, Trump and the late senator didn't get along, and Trump has repeatedly criticized McCain, even after his death. Once military leaders got wind of the discussion about moving the ship, "they said knock it off," a senior Navy official told CNN, and it stayed in place. Trump tweeted that he was "not informed" of anything having to do with the war ship before he got to Japan.

Eight people are dead and more than a dozen others missing after a sightseeing boat collided with another vessel on the Danube River in the Hungarian capital of Budapest. Thirty-five people, including 33 South Korean tourists, were on board last night when the vessel crashed and capsized. There's no word yet on why the boat sank after being hit, but the tour company says it's hosted thousands of trips like this one, with the boat operating safely on the river since 2003. South Korea's President and foreign minister are helping coordinate rescue efforts and communication channels for the families of those involved.

The French Senate has decided Notre Dame must be restored to exactly the way it was before that devastating April fire destroyed parts of the beloved landmark. There had been debate about whether to take the opportunity to give the cathedral a modern makeover. But the Senate ruled that Notre Dame must be restored to its "last known visual state," which includes the 300-foot-tall spire that crumbled during the blaze. The plan is to have the work done in about five years, in time for Paris to host the 2024 Summer Olympics. But that's a point of contention, too: Some say, in order to be done properly, the reconstruction should take two or three times that long.

Which is about as much as you'll spend once you get there!

The 2019 Scripps National Spelling Bee is upon us

See, THIS is the kind of futuristic technology we've always dreamed about.

Exploding stars may have motivated human ancestors to walk

Talk about a cosmic intervention.

And wouldn't you know it, that animated dog hasn't aged a day.

Indian Prime Minister Narendra Modi will be sworn in today for another five-year term after winning a landslide victory in the country's massive general elections.

The number of tornadoes that have been reported this year, according to the National Weather Service. That's way above average. The month of May has been an especially busy period for tornadoes as well, with 500 reported tornado events coming in the span of 30 days.

"Obviously I'm very concerned with the situation around the backsliding of women's rights that we're seeing from conservative movements here in Canada, in the United States and around the world."

Indiana gets dozens of price gouging complaints amid virus