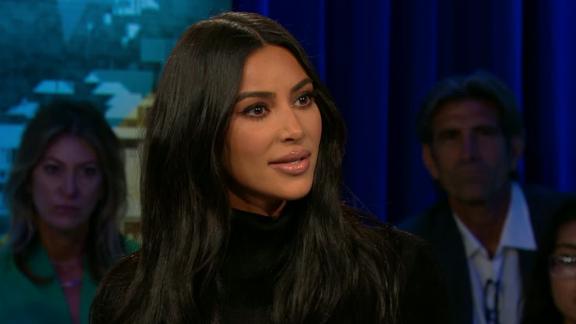 Kim Kardashian tells CNN's Van Jones about her decision to become a lawyer and what she learned from her father.

Kim Kardashian West said that she would not use her privilege to get her children into a college that they couldn't get into on their own because it wouldn't help anybody.

"If they couldn't get into a school, I would never want to use privilege to try to force them into a situation that they wouldn't thrive in anyway. So that's where I just see that that's not appropriate," she told CNN's Van Jones on Saturday night.

"I want my kids to be kind. I want them to be as grounded as possible. And to buy your way into something just wouldn't benefit anybody," she added.

Kardashian West's comments on "The Van Jones Show" come weeks after prosecutors charged 50 people in a sprawling conspiracy to game the college admissions system. The scheme involved 33 wealthy parents, including two prominent Hollywood actresses, who allegedly used their means to manipulate the admissions system and get their children into selective universities.

Kardashian West has taken a keen interest in social justice in recent years and is currently studying to be a lawyer. She said she hoped her hard work in balancing her media career, her makeup business and her legal interests set an example for her children Saint, North and Chicago West.

"To me, even having my kids see me studying, leaving and going into an office a few days a week, studying all the time, coming home. I have my backpack, they have their backpack. They're studying, I'm studying. They're seeing that I have this filming career, I'm having makeup samples tested all over my arm while I'm trying to read my flash cards, and all of this stuff.

"I hope that they get inspired to know that they know they can put in the hard work, and even though I'm in my late thirties and I'm just finishing college, or attempting to do that now, it's never too late, and there really is no easy way out.

"I've always worked hard, and I hope my kids see that work ethic and want to do the same thing," she said.