An inmate who was stabbed was left to die in a prison yard by correctional officers, lawsuit says 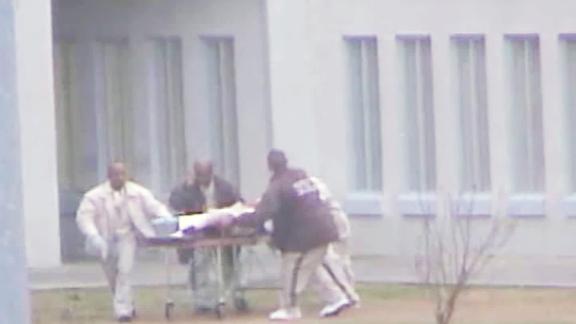 After Allen Capers was stabbed in his cell, correctional officers dragged him into the prison yard and left to bleed for hours without any help, according to a lawsuit against the South Carolina's Department of Corrections.

Allen Capers knew he had done wrong and was willingly serving his time for armed robbery and kidnapping at Turbeville Correctional Institution in South Carolina, his mother, Debra Capers Dickson, said at a news conference Thursday.

But according to a lawsuit against the state's Department of Corrections, his life was cut short when he was stabbed inside his cell, dragged into the prison yard by correctional officers and left to die. The suit says prison personnel walked by him, leaving him to bleed to death on New Year's Eve 2017.

"Allen did something wrong," Dickson said Thursday. "But he wanted to do his time because he knew he did wrong. He wanted to make it right."

Capers' final moments were caught in disturbing surveillance footage obtained and released by the family's attorney, Justin Bamberg. The footage shows Capers struggling to get to his feet and repeatedly falling to the ground. Over the course of the video, Capers was approached by correctional officers several times, but he was not given medical treatment.

South Carolina Department of Corrections spokeswoman Chrysti Shain said in a statement, "More should have been done to render aid and help this offender."

"The matter is under criminal investigation," Shain said, "and also the actions of the staff are under internal review for disciplinary actions."

The family's wrongful death lawsuit against the South Carolina Department of Corrections accuses the agency of gross negligence for "failing to prevent the brutal attack" that killed Capers. It also claims that the Department of Corrections failed to place the appropriate number of correctional staff in the prison and that employees were not properly trained "to recognize a medical emergency," among other allegations.

In Thursday's news conference, Bamberg alleged that inmates were somehow able to obtain keys from a correctional officer. He did not offer additional details about how that was known, citing ongoing court proceedings.

The inmates allegedly opened Capers' cell and stabbed him "numerous times" in the head, neck, stomach and hand, the lawsuit says.

According to Bamberg, a guard subsequently came into the dorm, saw Capers lying in a pool of blood and took him out into the prison yard while other inmates were fighting.

At the time the surveillance footage begins, it's not clear how long Capers has been in the yard. The video, obtained by Bamberg and first reported by NBC, is more than 36 minutes long. Bamberg said Capers was in the yard for approximately 45 minutes to an hour.

The footage shows Capers was left alone for extended periods. Correctional officers and inmates repeatedly approach him, but each time, he's left in the yard alone, appearing to struggle on the ground and crawling toward the prison.

About 26 minutes into the video, two inmates attempt to get Capers into a wheelchair, but they're unable to, and leave him once again.

Four inmates appear with a stretcher eight minutes later, and they and a prison guard finally wheel Capers out of the view of the surveillance camera.

According to the lawsuit, Capers was finally given medical aid "several hours later when they took him to the in-house medical facility."

At that point, however, he was unresponsive and had no pulse, the lawsuit says. Capers was placed on the floor and died.

Bamberg, who is also a state representative, tied Capers' death to the larger issue of prison reform in South Carolina. He urged changes to the system, including the issues of inmates' medical care and safety.

He credited the Department of Corrections' current director Bryan Stirling for making "a valiant effort" to try to address issues that had been in place when he took the helm of the department.

"There are just far too many problems that have been neglected to be addressed for far too long," he added.

"Things like safety, things like changing out the locking system, things like having a proper staffing -- all of these would have prevented this from happening to Allen Capers," he said.