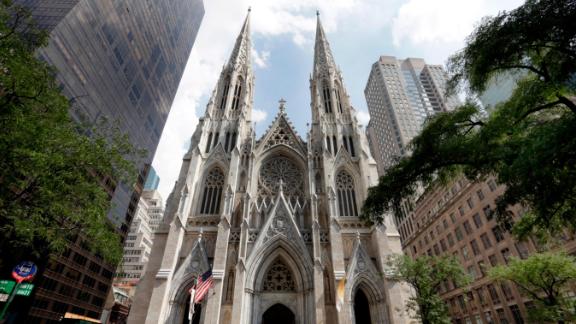 A man is in custody after he tried to enter St. Patrick's Cathedral in New York with gallons of gasoline, lighter fluid and lighters, authorities said.

For more than an hour, Marc Lamparello drove and walked around St. Patrick's Cathedral before he entered the church carrying gallons of gasoline, lighter fluid and lighters, New York police said.

He walked 20 feet into the church on Wednesday evening and almost reached the last row of pews when an usher approached him, telling him he could not be there with the cans of gasoline, NYPD Deputy Commissioner John Miller told reporters.

Before he was arrested, the 37-year-old then told counterterrorism officers that he was trying to reach his minivan because it had run out of gas. Miller said officers confirmed Lamparello's vehicle had fuel.

Lamparello, of New Jersey, is expected to be charged on Thursday with attempted arson, reckless endangerment and trespassing. It's unclear when he will be arraigned.

His arrest appears to have ended a series of events that took place over 72 hours. Police said the suspect had been staying at a hotel for several days and was arrested Monday when he refused to leave the Sacred Heart Cathedral in Newark, New Jersey.

During that incident, Lamparello "got into a physical altercation" with Essex County Sheriff's Office deputies, Miller said.

And hours before Wednesday's incident, the suspect booked a one-way flight to Rome that was set to leave Thursday evening, authorities said.

Lamparello's arrest comes days after the historic Notre Dame Cathedral in Paris burned in what officials say could be an accident related to renovation work.

Authorities said the suspect did not make any references to Notre Dame while speaking to investigators.

"It's hard to say exactly what his intentions were, but I think the totality of circumstances of an individual walking into an iconic location like St. Patrick's Cathedral, carrying over four gallons of gasoline, two bottles of lighter fluid and lighters is something we would have great concern over," Miller said.

Before entering the church, the suspect retrieved the items from a minivan he had parked near the church, Miller said. The NYPD swept that vehicle and did not find any additional materials.

Kevin Donohue, director of building operations at the cathedral, had said security officers stationed at each entrance of St. Patrick's immediately noticed the man when he came through the main entrance.

"This gentleman walked in the door, and he caught the eye right away, and he was confronted," Donohue said.

The man initially told officers he was cutting through the cathedral to get to Madison Avenue and that his car had run out of gas, but Miller said when officers checked his car, it had gas.

"Upon questioning him, his explanation for being in the area wasn't legit, and he was taken into custody," Donohue said.

Authorities described the suspect as emotionally disturbed. Nobody was injured in the incident and police are investigating.

Cardinal Timothy Dolan said Wednesday night's events showed that the system in place at the cathedral is effective.

"Our people were suspicious, walked the man out, immediately called the police department. They apprehended him, and now he's secure. So the system works," he said. "Does that mean it's fail-safe? No, but that's why we come to church: to pray for God's protection."

St. Patrick's Cathedral, which opened its doors in 1879, is a prominent landmark in the city.

In France, prosecutors investigating the causes of the Notre Dame inferno have interviewed construction workers and security staff as more details emerged about the effort to contain the blaze.

Security guards at the 850-year-old cathedral first heard the fire alarm at 6:20 p.m. local time on Monday, and evacuated the cathedral even though they didn't see any sign of fire, a spokesman for the Paris Fire Brigade said.

The alarm sounded again some 20 minutes later, at which point the cathedral's security officers noticed the fire.