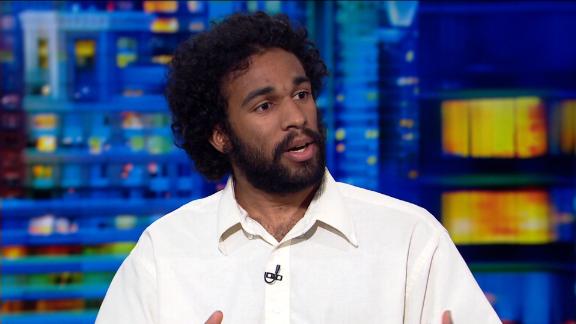 Barnard College is investigating a confrontation between a black Columbia University student and the college's public safety officers after video of the incident showed officers pinning the student down once he refused to show them ID.

Barnard College is investigating a confrontation between a black Columbia University student and the college's public safety officers after video of the incident showed officers pinning the student down once he refused to show them ID.

The school is hiring an independent investigator to review the incident and issue a public report with recommendations, according to a statement released Sunday by Barnard President Sian Leah Beilock.

"The confrontation puts into stark relief what some members of the Barnard College community, particularly people of color, have been saying about their relationship with the Office of Public Safety and the lack of trust they have in it to keep them safe," Beilock said. "We must ensure that public safety officers act equitably toward all and that the community trusts this will occur. That work is now underway, effective immediately."

The officers involved in the incident and their supervisor have been placed on administrative leave pending the outcome of the investigation. The school is also reviewing of how public safety officers and supervisors are trained.

Beilock apologized to the Columbia University student involved, without naming him, and to the students who witnessed the Thursday incident -- the latest racially charged encounter in the US involving a university student and campus security. Last May, police were summoned to investigate a black Yale graduate student who took a nap in her dorm's common room.

Barnard College is a women's school within the Columbia University network.

Details of the incident were not described in the statements released by Barnard. But CNN affiliate WPIX spoke to Alexander McNab, who identified himself as the Columbia student in the video and said he had come to Barnard in search of a meal.

"I saw that somebody posted about an hour ago about there being some food in the Milstein Center, that building over there. And so I decided to come over to Barnard's campus to see if there was any food left," McNab told WPIX. "And I started hearing somebody say "Hello, sir! Hello, sir!'" he said.

The WPIX reporter asked McNab "you think you didn't match what they perceived to be -- the public safety officers -- a Columbia University student?"

"No," McNab responded. "And the reason that I say that is because there were other people, even people that we talked to that night -- and then also there was a listening session held the day after where some students spoke -- who said that they came in after I did, right? And were not stopped by anybody."

It is Barnard's policy to require that anyone entering its gates after 11 p.m. show student identification -- a practice that was established in 2013, according to a Rochelle Ritchie, Barnard's executive director of news and strategic communications.

"Going forward, we will work on ensuring that our policy is enforced consistently and communicated effectively in keeping with our values," Ritchie said.

In a video of the incident provided by Barnard student Caroline Cutlip, McNab can be heard telling the public safety officers to "take your hands off me" multiple times.

You can hear one officer reference showing an ID. McNab appears pinned to a counter top during the confrontation.

McNab says "let me show you my ID, you want to see my ID? I'm a Columbia university student, you see this, that's me..."

"This is the third time Barnard public safety has chased me down and you put your hands on me. I didn't touch any of you..." McNab is heard saying in the video.

Barnard's president said the school is forming a safety group to serve as a forum for dialogue between public safety officers and supervisors and the Barnard community. It will be led by the school's executive director of equity and will include students, faculty, staff, along with outside expertise as needed.

Barnard is set to hold a listening session on Tuesday night. It held a similar session on Friday and has been in contact who those who have reached out to share thoughts and experiences.

"What has come across is a pervasive sense that racial bias remains pernicious on our campus," Beilock said. "In particular, people of color have expressed to me feeling excluded or singled out in campus life, in the classroom, and, yes, in dealings with public safety.

"I want to say directly that I hear you and am committed to change."

Beilock added that the school's policies must be equitably enforced, regardless of race, religious, ethnicity, gender identity or expression, sexual orientation or national origin.

Cutlip, the Barnard junior who filmed the encounter, told CNN she believes the officers involved should be disciplined and that the training public safety officials get is not sufficient.

"They have to receive some disciplinary action or officers in the future will say 'that's fine,'" she said, referring to the way the officers treated McNab.