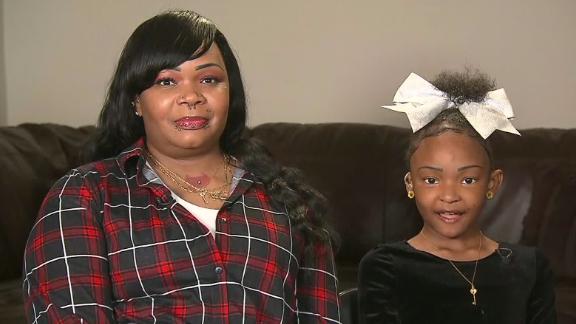 LaDerihanna Holmes, the 9-year-old girl who was struck by a car while playing in her front yard, spoke to CNN after she was released from the hospital, thanking all those who have helped her.

Not even a fractured skull and a shattered pelvis can keep LaDerihanna Holmes down.

Two weeks after a hit-and-run driver plowed into the 9-year-old and left her for dead, the suburban Atlanta girl is out of the hospital and looking more like her normal self -- a bright-eyed cheerleader with a big white bow in her hair.

"I'm doing good. I feel better that I'm out of the hospital," LaDerihanna told CNN's "New Day" on Monday.

She and her mother spoke out the same day the alleged driver was due in court.

Gabriel Fordham faces charges of failure to maintain lane, failure to stop at a stop sign, reckless driving, hit and run and serious injury by vehicle. A spokesman for Fordham's legal team said the suspect was fighting off a carjacker when the crash happened.

But she has bigger issues to worry about now -- LaDerihanna's recovery and fixing the house that the driver crashed through.

"Our house was badly damaged. We're in the process of getting everything fixed with that," the mother said.

"Her appointments, too -- psychological evaluations, therapies, rehabilitation. She's going to have about three appointments every week for months on end. The time frame is really unknown right now. It just depends on how she heals."

Both mother and daughter said they're grateful for the outpouring of support they've received, including from strangers around the world.

By Monday afternoon, donors had contributed more than $63,000 to the GoFundMe account for LaDerihanna's medical bills.