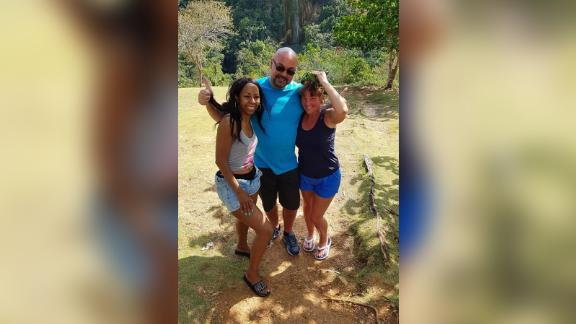 Guests at a resort in the Dominican Republic shared details of the day they spent with a New York couple who went missing shortly after. CNN's Rosa Flores reports.

Authorities in the Dominican Republic said Tuesday there is no evidence of foul play in the disappearance of a New York couple who were vacationing in the Caribbean country.

Orlando Moore and Portia Ravenelle were supposed to return to New York from the Dominican Republic on March 27, said Moore's half-sister, Lashay Turner.

But Moore's family has not heard from him since he left for the Dominican Republican on March 23 from Newark Liberty International Airport, Turner said. The couple left a car at the Newark airport.

The Dominican Republic National Police said the couple rented a Kia Rio for three days and the car was not returned.

Images show the car at toll booths. One of the photos was taken at 1:41 a.m. ET after their flight was scheduled to depart Santa Domingo. The photos show the car from the rear.

Police verified the passenger lists for departed flights from the country from March 24-27 and the couple was not on them, the national police said.

'They were a very sweet couple'

Cheryl Freeman and her boyfriend are believed to be among the last people who spent time with the couple on their final day in Samana, a resort town about 2.5 hours from the capital of Santo Domingo.

Freeman fondly remembers the couple, whom she had hoped to keep in touch with after she returned to Canada.

"They were very sweet people," said Freeman, an accountant in Halifax, Nova Scotia.

"Orlando is so friendly he could make friends with anyone."

This is Freeman's account of the time she spent with the missing couple.

A chance encounter on a cart ride

Freeman and her boyfriend Carter Warrington stayed at the same all-inclusive resort as Moore and Ravenelle, the Grand Bahia Principe Cayacoa.

On the morning of March 25, the two couples met on a cart ride from their villas to the breakfast buffet, Freeman said.

Immediately, the couple was friendly and invited Freeman and Warrington to eat breakfast with them.

After breakfast, the couple parted ways and exchanged emails so they could meet up the next day, Tuesday, March 26.

After breakfast Tuesday, the foursome sat by the pool, drinking piña coladas until it started to rain, Freeman said.

They agreed to meet in the lobby at 12:30 p.m. to find a waterfall, Freeman said.

Moore told them he had made friends with the hotel bartender the night before, Freeman said, and the bartender sent them to a friend in El Limón for sightseeing.

Moore drove the four in a Kia to El Limón, where they met the bartender's friend.

For $20 per person, the friend took them horseback riding up a mountain and down to a valley where they spent the afternoon by a waterfall.

Freeman shared gleeful photos of the couples sharing toasts and sipping drinks from pineapples. In one photo, they smiled and hugged as they posed in front of a waterfall. Another photo captured Moore on horseback.

At some point in the day, Freeman said she learned that the couple had a flight around 2 a.m. out of Santo Domingo, located roughly 100 miles from their resort.

Ravenelle told Freeman that they got a good deal on the airfare, but she had not realized how far it was from their hotel.

To make it to the airport on time, the couple had rented the car they used for sightseeing, Freeman said. But Ravenelle expressed anxiety about the prospect of driving at night, Freeman said.

Throughout the day, Freeman said Ravenelle was on her phone talking to the rental company about what time they would return the car. Ravenelle also said she was talking to her daughter, according to Freeman.

On the drive to El Limón, Freeman said Ravenelle told them the rental company warned them to not stop and open their windows for anyone because the locals know which cars are rentals, and try to mug tourists.

During the drive, Ravenelle told Moore not to roll down his window for the men on speed bikes driving up next to their car, Freeman said.

On the way back to the hotel, Ravenelle repeatedly asked Moore if he was sure they had enough gas to make it to the airport. She kept checking to make sure their phones were charged enough to use the GPS, Freeman said.

After returning to the hotel, the couples separated for dinner, Freeman said. They agreed to meet around 8:30 p.m. to go to a disco in Samana.

At the bar, the couples split a bottle of rum. They also saw the hotel bartender and his wife there, Freeman said.

Again, Freeman said Ravenelle appeared nervous, wanting to leave because she was worried about traveling to the airport and returning the car.

Freeman said she was nervous, too, as a tourist in Samana.

Locals "harassed you constantly and there were always people trying to get you to follow them and do stuff," she said. "I would not recommend it."

They returned to the resort between 9:30 p.m. and 10 p.m. Tuesday. They hugged goodbye in the lobby and promised to exchange photos over email and keep in touch.

"They invited us to come see them in New York and we invited them to Nova Scotia for later in summer."

Freeman said the last thing the couple said to them was that they were going upstairs to pack up and check out.

That was the last they heard from them

After the couple left, Warrington, Freeman's boyfriend, sent Moore an email wishing them a safe flight.

He never heard back from him.

Freeman said she did not realize the couple had gone missing until she returned to Halifax on March 31 and discovered several emails from Ravenelle's family.

Freeman said no law enforcement agencies have contacted her about their disappearance.

Now, details about the resort stick out in Freeman's mind. She noted that there was a security guard armed with a rifle guarding her villa every night at the hotel. She also said the public could access the resort via the beach.

In the brief time she knew her, Freeman said Ravenelle came off as "very cautious," adding that she would be surprised if Ravenelle would have let Moore stop even for directions.

His sister said she filed a police report with Mount Vernon Police on March 29. But the office of the chief said no report was filed about Moore, and the department is not conducting an investigation.

Turner said she has been trying to call law enforcement in the Dominican Republic, but has struggled to get information.

"My brother's not the type to just run off and not tell anybody."