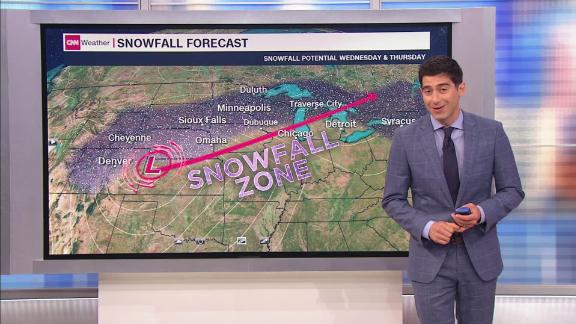 The severe weather threat continues in the South. Meanwhile, a potent winter storm with possible blizzard conditions is beginning to take shape in the Rockies.

Wa-hoo! Congrats to the Virginia Cavaliers, who won the school's first men's college basketball national championship just a year after they were the first No. 1 seed to lose to a No. 16 seed in the tournament.

Kirstjen Nielsen was just the beginning. Donald Trump is cleaning house at Homeland Security. A day after Nielsen was dropped as secretary of Homeland Security, Secret Service Director Randolph "Tex" Alles was given the boot. And word is at least two other senior leaders will soon be shown the door, too. One official described all this to CNN as "a near-systematic purge." Many say this is the handiwork of White House senior adviser Stephen Miller, who has been nourishing the President's inclinations to take ever more hardline stands on immigration. So, Trump is now sweeping Homeland Security of those deemed not tough enough on the issue.

We're also now getting more info on what led to Nielsen's ouster. She rebuffed Trump's order to shut down the border crossing at El Paso, Texas, and bring back the family separations policy for migrants. When Nielsen told the President closing the border crossing would only end legal trade and travel (and that migrants would just go between ports), Trump told her, "I don't care." And last week, during his visit to the border at Calexico, California, the President told border agents not to let migrants in, two sources told CNN. After Trump left the room, the agents' bosses told them essentially to disregard it, because doing what Trump ordered would be breaking the law. CNN's Stephen Collinson said it's a dilemma many in the administration end up having to deal with: "They can respect the law or they can work for Donald Trump. It's often just not possible to do both."

Israeli voters go to the polls today in a general election widely seen as a referendum on Benjamin Netanyahu. The longtime Prime Minister is battling accusations of corruption and faces possible bribery and breach of trust indictments that could soon be brought by the country's attorney general. Netanyahu denies any wrongdoing and hopes his close ties with two of the most powerful men in the world -- Trump and Russian President Vladimir Putin -- will be enough to carry him to victory.

Please, don't roll your eyes and skip down to the next item. You're probably as tired of Brexit stories as we are, but what happens today could be a big deal. Really. UK Prime Minister Theresa May meets with German Chancellor Angela Merkel and French President Emmanuel Macron as the Brits work to get another extension for leaving the European Union. EU leaders will meet tomorrow to talk about May's request to move the Brexit deadline past Friday. UK lawmakers last night finally OK'd a Brexit bill that would block the dreaded no-deal Brexit, in which the UK would leave the EU without a transition plan. Many predict that would unleash an economic catastrophe for Great Britain.

Thirteen wealthy parents and a coach will plead guilty to bribery and fraud charges in the college admissions cheating scandal case. And it looks like federal prosecutors will want the defendants to serve some prison time. For example, prosecutors say they would recommend actress Felicity Huffman, who faces 20 years in prison, get a sentence on the "low end" of the sentencing range in exchange for her plea. A federal judge will have the final say on what happens to Huffman and the other defendants. Huffman was contrite and apologized in a statement, saying she's "ashamed of the pain" she's caused her family and friends.

5. Duke and Duchess of Sussex

It's a real royal conundrum. The Duke and Duchess of Sussex -- better known to us as Harry and Meghan -- are expecting their first child any day now. It's a really happy time. But because both Meghan and her soon-to-be baby (seventh in line to the British throne) are US citizens, they'd be liable to pay US taxes, which could open up those private royal financial accounts to the IRS, something the royals would rather avoid. Meghan could head this off by renouncing her US citizenship once she becomes a British citizen, but the child would still be liable for US taxes until the age of 18.

"American Idol" without Ryan Seacrest? Oh, the horror! But it happened last night. Seacrest missed hosting the show for the first time because of illness.

The robots are coming

A sure sign of the coming robot apocalypse? Robots taking over your local Walmart. The mega retailer will use more of them to mop floors and unload boxes.

Do it the hard way

Think running a half marathon is hard? Try running it wearing 50 pounds of gear. This Pennsylvania firefighter did.

"The Walking Dead" will never die because AMC won't let it. The network announced yet another new series in the zombie franchise.

Attorney General William Barr will testify before Congress. He's supposed to be talking about the Justice Department's budget, but you know Democrats will hammer him about the Mueller report.

"I know that, as a white man, I have to hold my fellow white men accountable."

NBA player Kyle Korver, writing in a deeply personal essay for the sports website The Players' Tribune about white privilege and the fight against racism

Hollywood special effects aren't just for the big screen. They can save lives, too. (Click to view.)