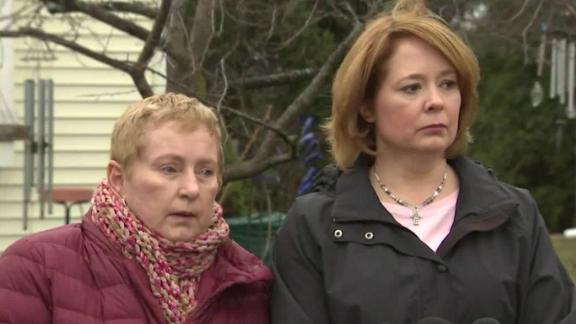 Timmothy Pitzen's grandmother and aunt give remarks after the FBI determined that the boy claiming to be Timmothy Pitzen is not actually him.

Could we be getting a break from a few years of brutal hurricanes? Researchers are predicting a slightly milder than average Atlantic hurricane season this year, so ... fingers crossed! Here's what else you need to know to Get Up to Speed and Out the Door. (You can also get "5 Things You Need to Know Today" delivered to your inbox daily. Sign up here.)

A bizarre story that unfolded this week has reached an even more bizarre conclusion. DNA tests have confirmed a young man wandering the streets in Kentucky is not Timmothy Pitzen, an Illinois boy who disappeared at the time his mother committed suicide in 2011. Brian Rini, 23, claimed to be the missing boy and provided elaborate details to police about escaping kidnappers. The unexpected twist revived the 8-year-old case and reopened old wounds for Timmothy's family. "It's devastating. It's like reliving that day all over again," Kara Jacobs, Timmothy's aunt, said. "Timmothy's father is devastated once again." It's unclear why Rini impersonated Timmothy, who would now be 14. However, records show Rini was released from an Ohio prison last month after serving time for burglary and vandalism.

Michael Cohen apparently isn't done yet. In a bid to remain out of jail, President Donald Trump's former lawyer and "fixer" is offering congressional Democrats new information about the recently concluded Russia investigation. His attorneys told lawmakers in a letter Thursday that Cohen has discovered substantial files on a hard drive that might be helpful to investigators. Cohen was sentenced in December to three years in prison for financial crimes, campaign finance violations and lying to Congress. His lawyers said Cohen's jail time should be postponed to access and review the files. In addition, his attorneys asked top Democrats on the committees where Cohen testified this year to vouch for his cooperation in hopes of reducing his sentence. In his testimony on Capitol Hill, Cohen accused Trump of financial fraud and directing hush-money payments to women alleging affairs. He provided documents to corroborate his claims, but since he wasn't totally forthcoming earlier about the scope of his criminal conduct, the US attorney's office in Manhattan did not give him a cooperation agreement.

Philippine President Rodrigo Duterte has escalated tensions between the Philippines and China regarding ownership of lands in the South China Sea. During a speech Thursday, Duterte threatened to send his troops on a "suicide mission" if Beijing doesn't "lay off" the Manila-occupied Thitu island. His harsh words came just days after the Philippine government claimed as many as 275 Chinese boats and ships had been spotted around the island in recent months. The South China Sea is one of the world's most disputed regions and critical shipping lane. The Philippines and China, along with several other countries in the region, each claim overlapping parts of it.

Trump is facing another legal challenge to his emergency declaration regarding the crisis at the southern border. Speaker Nancy Pelosi says the House of Representatives will file a lawsuit against Trump, claiming that his decision to transfer funds from appropriated accounts to a southern border wall violates the Appropriations Clause of the Constitution. If you'll recall, the ugly deadlock between Trump and the Democrats over the proposed border wall resulted in the longest government shutdown in history, followed by Trump declaring a national emergency to secure billions of dollars in funding for the wall. In addition to this latest potential suit from the House, the administration is facing seven other legal challenges to the declaration from states, environmental groups and nonprofit organizations.

The threat of measles continues to crop up across the country. In Sacramento, California, the UC Davis Medical Center sent letters to 200 people who visited its ER on March 17, saying they may have been exposed to the highly contagious disease. In the first three months of this year, 387 individual cases of measles have been confirmed in 15 states. That's the second-highest number of cases reported in the United States since measles was declared eliminated in 2000.  The US Centers for Disease Control and Prevention also says six outbreaks -- defined as three or more cases -- are ongoing in four states: two each in California and New York, one in New Jersey, and one in Washington.

Absolutely no one asked for this, yet everyone kind of loves it.

2.7 million people still get Netflix DVDs in the mail

And Netflix makes a pretty good profit off of it!

Jeff and MacKenzie Bezos agree to divorce terms
Their future Bumble profiles are going to be WILD.

Sears and Kmart are rebranding to try to stay afloat
If Netflix still has legitimate demand for DVDs by mail, there has to be hope for these two.

Which country recently elected its first female head of state?

UK Prime Minister Theresa May has officially submitted a request to delay Brexit until June 30. The current cut-off date is April 12, although it was likely that some sort of deal would be worked out before then. Don't be surprised if the European Union proposes a longer delay instead.

The number of young people around the globe who do not have access to the internet for school, according to UNICEF. It may seem like a luxury to those who grew up with no internet at all, but in today's world it means these students are disconnected from a wealth of knowledge that others take for granted.

The weekend is almost here. Have some popcorn! Some very, very slow popcorn. (Click here to view.)