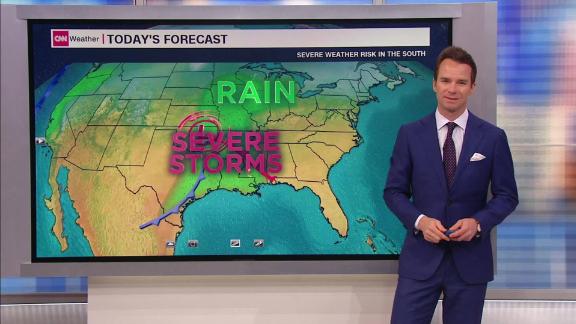 Severe storms could bring damaging winds, hail and even tornadoes to people across the South today. Derek Van Dam explains where you can expect the severe weather.

New Mexico has officially made the switch: The state has changed the name of Columbus Day to Indigenous People's Day. Here's what else you need to know to Get Up to Speed and Out the Door. (You can also get "5 Things You Need to Know Today" delivered to your inbox daily. Sign up here.)

It was a busy day Wednesday for the dysfunctional Brexit machine, but on the bright side, UK lawmakers have actually come to an agreement on something. The House of Commons narrowly voted in favor of legislation that forces the UK government to request another extension to the Brexit process. This effectively bans a no-deal Brexit option and, despite all the dissatisfaction surrounding Prime Minister Theresa May's solution, that clearly casts her Brexit deal as the lesser of two evils. The option for a second referendum still looms as well. This was once considered to be unthinkable, but seeing as a no-deal Brexit is now off the table, expectations are changing. There are signs of optimism for the future of the Prime Minister's much-maligned Brexit plan, but she still faces more bad news than good: On Wednesday, two of her ministers resigned as a result of her efforts to compromise with opposition leader Jeremy Corbyn.

Safety investigators have released findings from a much anticipated preliminary report on last month's deadly crash of Ethiopian Airlines Flight 302, providing the first official clues as to the cause of the disaster. The investigation concluded that the Ethiopian Airlines crew repeatedly followed all procedures recommended by Boeing but still could not save the Max 8 jet. The findings will likely do further damage to Boeing's reputation. Two years ago, Boeing's leaders boasted about how quickly the company had brought the 737 Max to market, and how "streamlined" the certification process was. These findings are likely to raise more questions about the training process surrounding the aircraft's flight software.

The quest for President Donald Trump's tax returns has officially begun. Democratic House Ways and Means Committee Chairman Richard Neal formally requested six years of Trump's tax returns from the Internal Revenue Service on Wednesday, which will probably set off an ugly legal and constitutional battle that could stretch on for months, if not years, and potentially solve several long-pondered secrets about the President's financial past. To that end, Neal also requested the tax returns of eight Trump business entities to get a fuller picture of the situation. Trump's refusal to release his taxes has become a prime political football, but Neal says the committee's request is about "policy, not politics." It is a long-held custom that incoming presidents release their tax returns to the public, and the result of this inquiry will do a lot to determine how much the congressional majority can rein in the President.

In the wake of last month's massacre in Christchurch, New Zealand, Australia has passed a sweeping law to stop the spread of violent content online. Under the new law, which passed both houses of Parliament today, internet companies such as Facebook and Google will be compelled to stop the spread of violent material. If they don't, executives could face serious fines or jail time. The  Christchurch suspect livestreamed a large portion of the attack online, and Facebook and other platforms were criticized for their slow response. This is just the latest change the region has made following the tragedy: Just days after the attack, New Zealand's government passed a gun law banning military-style, semi-automatic weapons.

Tesla just reported the biggest sales drop in its history, and while a weak first quarter was to be expected across the board on Wall Street, the electric car company needs to continue making money to pay off its sizable debts. The logistics of international orders is one factor that contributed to the dip, as did the lags between consumers purchasing a model and then actually having it delivered. While this was certainly not a shocking development for Tesla, it probably doesn't help that CEO Elon Musk is heading to court against the US Securities and Exchange Commission. The SEC is asking that Musk be held in contempt over violating a settlement agreement reached last year requiring him to get pre-approval for social media posts about his company.

We hear "directly into our wallets" could be a promising venture.

They're training to navigate complex urban roads. So if you're in the area, you know, just look both ways before you cross.

What we're not eating is killing us, global study says

It's not just that people eat too much salt and sugar. They also don't get enough whole grains, fruit, nuts, seeds and other good stuff.

But will he appear in the next "Avengers" movie?

France wants a homeowner to destroy his sweeping $64 million chateau

Not that building things illegally is OK, but let's just say at that price point, France's argument better be pretty convincing.

Robert De Niro, who says he refuses to be politically intimidated after being one of several high-profile figures targeted by a pipe bomber in October.

The number of countries where homosexual sex is punishable by the death penalty, according to an International Lesbian, Gay, Bisexual, Trans and Intersex Association report. On Wednesday, Brunei became the seventh when its government enacted a controversial stoning law.

Because some days you just need to watch a bunch of robots falling over. (Click here to view.)