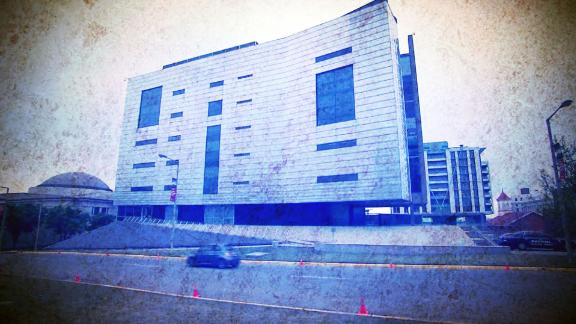 The Southern Poverty Law Center, having been in the forefront in the fight against racial inequality since 1971, is now being accused by some staffers as suffering from a "systemic culture of racism and sexism within its workplace". CNN"s Nick Valencia reports.

Some employees at the Southern Poverty Law Center say the legendary civil rights nonprofit group suffers from a "systemic culture of racism and sexism within its workplace."

The SPLC, which has been on the front line of the fight against racial inequality and injustice in the United States since 1971, has been thrust into chaos after allegations over its treatment of minority and female employees.

The claims have been followed by changes in its leadership and a company-wide review.

CNN spoke with three current employees of the organization who talked on condition of anonymity because of fears over possible retribution.

It was one of those employees who cited the systemic problems with racism and sexism, and a second employee agreed with that assessment.

The Alabama-based activist group is nationally known for tracking civil rights abuses and hate crimes, while preaching tolerance. The group established itself as a crusading force by fighting racism and exposing extremist groups, taking many cases pro bono. A famed civil rights activist, the late Julian Bond, was the group's first president.

Changes at the top

But one of the employees who spoke to CNN alleged the organization suffers from a "pervasive racist culture" and an environment in which a woman is not seen or heard. She also said qualified African-American employees were regularly passed over for promotions -- including one African-American colleague she describes as brilliant. She added, "My boss only hires white people."

The employee described the current upheaval at the SPLC as a revolution against the organization's leadership, "initiated by employees" because workers were "tired of seeing the pervasive culture exist" unchallenged by those in charge.

The organization said Dees had previously been disciplined after a prior investigation into "inappropriate conduct." It would not elaborate on the nature of that conduct.

"When one of our own fails to meet those standards, no matter his or her role in the organization, we take it seriously and must take appropriate action."

Last week, Cohen himself stepped down after more than 30 years with the center, saying his departure would help the SPLC move forward.

"We've heard from our staff that we need to do a better job of making sure that our workplace embodies the values we espouse -- truth, justice, equity, and inclusion," Cohen said in a statement.

The SPLC continues to go through upheaval, with its legal director abruptly resigning in recent days. She would not comment when contacted by CNN.

One employee said of Cohen's departure, "Employees asked the president to step down. He didn't do anything to change the culture, and he left because of it."

CNN reached out multiple times on Monday to Dees and Cohen about the workplace allegations. They have not returned our messages.

When initially asked about his termination, Dees told CNN it wasn't his decision to leave SPLC. "It's a very fine group. I've devoted 50 years of my life to the center. I wish them the very best," Dees said. He would not elaborate on how he learned about his dismissal or the reasoning behind it. He only said that he "can let (his) life's work and reputation speak for itself."

In the past few years, Dees said, he mostly went to the center to make calls to big donors.

As SPLC's chief trial counsel, Dees began in the early 1980s to use courts to secure monetary damages against hate groups. As part of the judgments he helped win against those groups, courts would then seize the groups' assets.

In 1981, Dees successfully sued the Ku Klux Klan and won a $7 million judgment for the mother of Michael Donald, a black lynching victim in Alabama. The judgment bankrupted the United Klans of America, which had to sell its national headquarters to help pay it off.

The SPLC communications department, while defending the group's handling of the current crisis, has not responded to questions about the specific substance of the various allegations. A spokeswoman said the group's leadership has taken the initiative to improve culture, and that Cohen urged leadership changes in October, prompting the SPLC board to appoint a search committee for his replacement.

"Richard told the board that a number of legacy civil rights organizations had transitioned to a new generation of leaders in recent years and that we should, too," spokeswoman Jen Fuson told CNN.

"The events of the last week have been a clear reminder that the walk towards justice must start at your own front door," Bryan Fair, chairman of the Southern Poverty Law Center's board, said in a statement.

"We acknowledge and take very seriously the significant concerns that our talented and deeply committed staff have raised, and we are committed to listening further, taking ownership wherever we have failed to live up to our own standards and values, and to making any changes necessary at the conclusion of this process to ensure that the Center is exemplifying and upholding them."

One of the employees told CNN that the rank-and-file within the SPLC are deeply divided between those who are seeking a complete overhaul and those who support leadership efforts to review the culture.

"We are so divided," the employee said. "I want to see us rise through the ashes. The white males here who are calling the shots can't ruin us."

"It all started with the resignation of Meredith Horton," an employee said, referring to the SPLC's outgoing associate legal director.

Horton was a high-ranking African-American woman in the organization.

In her resignation letter, obtained by CNN, Horton cited concerns about workplace culture. " ... It should not be a surprise that as a woman of color, the experiences of staff of color and female staff have been particularly important to me," she wrote.

"... we recognize that there is more work to do in the legal department and across the organization to ensure that SPLC is a place where everyone is heard and respected and where the values we are committed to pursuing externally are also being practiced internally."

According to one employee, action was taken against Dees after Horton submitted her letter.

But another employee told CNN that allegations of misconduct were "greatly exaggerated."

"I'm completely happy here," the employee said. "We have many women in leadership."

Another employee said Dees "didn't catch up with the times."

That source said Dees was an amazing salesman, adding that he was also a "scapegoat," for the company's problems.

The center has strongly defended its response to recent events.

"No one, no matter that person's position at the SPLC, will be exempt from scrutiny and accountability as part of that process," Fuson said in a statement.

"As a civil rights organization, the SPLC is committed to ensuring that the conduct of our staff reflects the mission of the organization and the values we hope to instill in the world."