Special Olympics in Abu Dhabi is a sign of progress 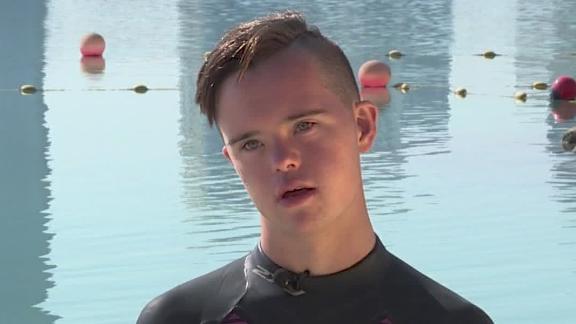 16-year-old Briton Conor Conway is set to compete in the 1,500 open-water-swim at the Special Olympics World Games.

Before they met and became friends in Washington last December, Tori Martin and Mubarak Al Darmaki grew up in different worlds.

Tori, from northern Virginia, learned to swim before she could walk. She began competing in meets. Seven thousand miles away, in Abu Dhabi, Mubarak discovered basketball and honed his skills against players who were bigger, stronger and faster.

Tori and Mubarak both love sports, but they are also bound by something else that crosses all cultures and borders. They are among the 200 million people around the world who have an intellectual or developmental disability.

This week, they will represent their respective nations at the Special Olympics World Games in Abu Dhabi. They will carry with them a hunger for inclusion and dignity that burns within all people, a hunger that's now on the global agenda, an agenda that's led by people with intellectual disabilities that will benefit everyone.

The Middle East has lagged behind the rest of the world in respecting the needs and potential of people like Mubarak and Tori. But the tide is turning. Cultural and social barriers are being overcome.

A vivid example of progress will begin when more than 7,500 athletes from more than 190 countries — a record for Special Olympics -- will join Tori and Mubarak in the United Arab Emirates. The games in Abu Dhabi are the first World Games to be held in the region, and the biggest ever.

We hope they will shine a light on the abilities, accomplishments and untapped power of people who have been marginalized around the world. We hope these games will spark much-needed action to end the discrimination, abuse and neglect these athletes and millions of others endure every day.

After Abu Dhabi was announced as this year's host city, Special Olympics and the UAE set an ambitious goal: to welcome a delegation from every nation on earth.

Nineteen of the countries competing in Abu Dhabi are sending teams to the world games for the first time.

That growth means many good things. It means there are many more Special Olympics volunteers, staff and competitions than there were four years ago. More countries where people with intellectual disabilities are empowered through sports.

And, most important, more countries where adults and children with intellectual disabilities, along with their families, are involved in their communities, fighting back against discrimination and showing who they really are — leaders who inspire everyone to reach their full potential.

The 2019 World Games represent a milestone, but there is much more to do. Fifty years after Special Olympics began in Chicago, the movement continues to strive for a better world.

But even in wealthy nations, people with intellectual disabilities face daunting injustice. They are sicker than the rest of the population and their lives are shorter, because their medical care is worse. They are more isolated and lonely. They are more likely to be bullied and humiliated in school and far less likely to hold meaningful jobs. Though they are leaders of great courage and kindness, their gifts have gone unnoticed, their efforts unrewarded.

In Abu Dhabi, everyone who tunes in will experience a new reality -- a movement for inclusion led by people with intellectual disabilities, and an opportunity for the world to follow this lead. It will be a time of play, of games and cheers and joy.

When Tori and Mubarak compete, they will be global ambassadors, educating people in the Middle East and around the world about the extraordinary gifts and talents of people with intellectual disabilities. Through their talent and skill, these athletes will seek to inspire greater inclusion -- and help end the fear of difference that still exists everywhere.

This is why Special Olympics has come to the UAE. To nurture the seeds of progress. To bring many thousands of people together, regardless of nationality, color, faith, gender or intellectual differences, to proclaim that the world must be made a more inclusive place for everyone in it.

Remembering Eva Kor a year after her death