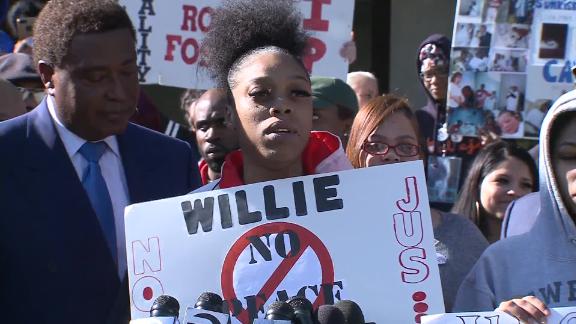 The sister of a California man speaks out after the man was allegedly shot more than two dozen times by police after apparently falling asleep in the front seat of a car in a Taco Bell drive-through.

The family of a northern California rapper who lawyers say was shot more than two dozen times by police intends to sue the city of Vallejo, alleging the police response was "bungled from start to finish."

Willie McCoy, 20, was fatally shot February 9 after apparently falling asleep in the front seat of a car at the drive-through of a Taco Bell in the San Francisco Bay area. Police said six officers later opened fire after McCoy appeared to reach for a gun in his lap.

"You all executed my brother Willie," McCoy's sister, Simone Richard, told reporters this week at a news conference where lawyers said the shooting was part of a disturbing series of questionable shootings, excessive force and racial profiling involving the Vallejo Police Department. "You all didn't give him a chance to put his hands up."

The family's wrongful death claim against the city -- filed Thursday as a precursor to a lawsuit -- said some responding officers were not wearing uniforms and that a "six person firing squad" shot McCoy about 25 times in the "head, ear, neck, chest, arms, shoulders, hands, and back."

"From our point of view we think ... that something is rotten within the Vallejo Police Department," said attorney John Burris, who claimed his office has been involved in at least 14 cases against the police department in the last seven years.

The claim said that when McCoy began to regain consciousness, the officers "failed to permit him to orient himself." Instead, they screamed at him to raise his hands and failed to give McCoy "time to comply with their commands."

The wrongful death claim is under review, Joanna Altman, assistant to the Vallejo city manager, said in a statement, declining further comment.

The police department and the Solano County District Attorney's Office did not immediately respond to a request for comment.

Before the court claim, the police department said officers were called by Taco Bell employees about a man who was "slumped over in the driver's seat." Officers said the man "was unresponsive and had a handgun on his lap."

After additional officers arrived, police said they discovered the driver's door was locked and the car's transmission was in drive.

When the "driver began to suddenly move and looked at the uniformed patrol officers," police ordered him "to put his hands up," according to a department statement.

"The driver did not comply and instead he quickly moved his hands downward for the firearm. Fearing for their safety, six officers fired their duty weapons at the driver," the statement said.

The officers fired multiple times in the span of about four seconds, police said.

"Any loss of life is a tragedy," Police Chief Andrew Bidou said in the statement, adding that the county district attorney was investigating the shooting.

The officers were initially placed on administrative leave and returned to duty after meeting with a psychologist, police said.

The loaded handgun in McCoy's lap -- a .40-caliber semi-automatic with an extended magazine -- had been reported stolen in Oregon, police said.

The McCoy family claim said a sheet of plastic took the place of a missing window in the car's passenger side door.

"Nothing but the thin piece of plastic prevented the Officers from opening and/or unlocking the car door to remove the unconscious man and/or gun," according to the claim.

Burris demanded that police immediately release footage from the officers' body cameras. Police said the footage will be shared with McCoy's family "in the coming weeks" and eventually with the public.

On Thursday, Simone Richard spoke to reporters as she held a sign with her brother's first name and the words, "No Justice. No Peace."

"I feel like something needs to be done out here because it is kids that they're killing," she said.

Minneapolis businesses, including some that were damaged, are standing in solidarity with protesters