CNN's Miguel Marquez reports on the victims lost in the Thousand Oaks shooting.

A day after a Marine Corps veteran stormed into a country music dance hall in California and opened fire into the crowd, killing 12 people, investigators said there is no clear motive behind the attack.

Authorities say Ian Long, 28, fired a Glock .45-caliber handgun without a word as many patrons line-danced at the Borderline Bar & Grill in Thousand Oaks around 11 p.m. (2 a.m. ET) Wednesday. He first shot a security guard and a woman working at the counter, but authorities say there was no indication he was targeting employees.

Hours after police found Long dead of what is believed to be a self-inflicted gunshot wound, law enforcement officials swarmed the home where he lived with his mother to search for clues, while hundreds of people joined family, friends and survivors to mourn the victims.

•From young Marine to a gunman. Long served in the Marines for nearly five years as a military machine gunner and was deployed to Afghanistan, Defense Department records show.

•A mental health expert declined to commit gunman. Police were called to Long's home in April for reports of a disturbance and a crisis team felt he might be suffering from post-traumatic stress disorder, but they ultimately cleared him.

•Long's mother "lived in fear" of what her son might do, a neighbor says. She was concerned about Long, the neighbor said, but she was not worried about her own safety.

•Hundreds of people gathered to mourn the victims. "Tonight we are a hurting city but we are a community of love, of compassion and of unity," Thousand Oaks Mayor Andy Fox said at a vigil Thursday night. "We are also a community of hope."

•Authorities have not named all of the victims, but CNN has independently identified some of them.

Long's friends say he was a frequent visitor at the bar for years and that he liked going there.

"I would make fun of him, because he would drag me there. Sometimes we'd go there to have a drink, sit and talk, listen to music," said a woman who's been friends with Long for five years and does not want her name made public.

Authorities have identified a Facebook post believed to have been made by the shooter around the time of the attack, according to a law enforcement official familiar with the ongoing investigation.

In it, the writer says: "I hope people call me insane... (laughing emojis).. wouldn't that just be a big ball of irony? Yeah.. I'm insane, but the only thing you people do after these shootings is 'hopes and prayers'.. or 'keep you in my thoughts'... every time... and wonder why these keep happening..."

When CNN read the post to a friend of Long's, who did not want to be publicly identified, the friend said, "That does not sound like Ian to me at all. I don't know what was going through his head when he wrote this. It must have been terrible."

Long's activities in the days before the shooting remain unknown. He was a corporal in the Marines from August 2008 to March 2013, according to Defense Department records. He went to Afghanistan from November 2010 to June 2011.

Curtis Kellogg, a friend who served with Long, said the last time he spoke with Long he was headed to Southern California.

"He was excited to get out so he could go back home, ride his motorcycle again and finish school," Kellogg said.

Long, whose Marines unit was based in Hawaii, was married in 2009 in Honolulu. The couple separated in 2011 and dissolved the marriage in April 2013 in Ventura County, California. He and his then-wife said they had no children and owned no property.

After leaving the Marines in 2013, Long went to college in California but did not complete his degree.

He was a student at California State University, Northridge, majoring in athletic training from 2013 to 2016, but he did not graduate, university representative Carmen Ramos Chandler said.

The lives of 12 people were cut short in the shooting, but only a handful of victims have been identified.

Ventura County Sheriff's Sgt. Ron Helus loved spending time with his son fishing and was hoping to retire in the next year or so after 29 years on the force. He was among the first officers to arrive at Borderline and was shot several times as he tried to stop the gunman.

Noel Sparks was a gifted dancer and artist, a friend says. Pepperdine student Alaina Housley was "an incredible young woman with so much life ahead of her," her aunt and uncle said.

Some of the other victims had connections with the military. Dan Manrique was a Marine Corps veteran and Cody Coffman was in the process of talking with Army recruiters.

Justin Meek recently graduated from California Lutheran University and was planning to join the US Coast Guard. He was looking forward to cooking for everyone at the school's Veterans Day Celebration on Monday, Cal Lutheran's veterans coordinator Jenn Zimmerman said.

He had returned to the school to support the Country Line Dance Club with Borderline.

"He loved running college night and always seemed to draw a crowd," Zimmerman said in a statement.

Late Thursday morning, residents and law enforcement officers crowded overpasses along a main road in Southern California as a procession of dozens of officers on motorcycles and in other vehicles escorted the body of Sgt. Helus to the Ventura County Medical Examiner's office.

As relatives tried to reach loved ones and survivors received medical attention, more than 200 people showed up to donate blood for the victims. The line extended out of the parking lot at La Reina High School, stretching down the street and wrapping around the block, school officials said.

"You know, you hear about all these things happening around the country, but it's different when it's close to home," one woman told Kristine Lazar, a reporter from CNN affiliate KCAL/KCBS. "You want to do everything you can."

Hundreds more gathered by dawn at city hall, a performing arts center and nearby colleges, lighting candles and praying together to honor the victims.

"You might not know everybody's name but you're there for everyone," resident Sara Willis told CNN affiliate KGO. "We're Thousand Oaks strong tonight." 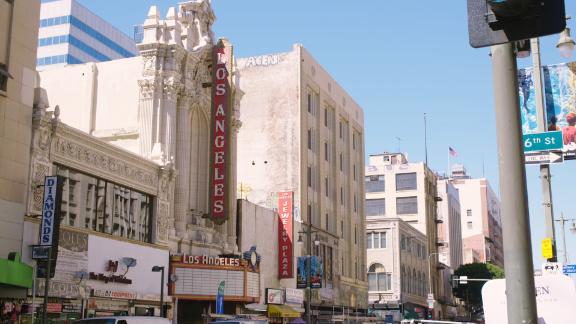