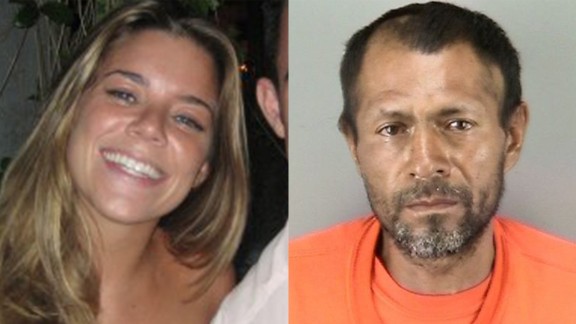 The murder case for Kate Steinle, a 32-year-old who was allegedly shot by undocumented immigrant Juan Francisco Lopez-Sanchez, is going to trial. CNN's Dan Simon reports on the case that brought sanctuary cities to the forefront and inspired new legislation.

The parents of Kate Steinle, who was shot and killed in July 2015 by an undocumented immigrant, cannot sue San Francisco for refusing to tell immigration officials of the shooter's release from local custody a few months before the killing, a federal appeals court ruled Monday.

In a wrongful death lawsuit, Steinle's parents had argued that San Francisco and its former sheriff were partly to blame for their daughter's death, because officials failed to notify Immigration and Customs Enforcement when Jose Ines Garcia Zarate was released from jail.

Garcia Zarate, an undocumented immigrant and repeat felon from Mexico who'd been deported five times prior to the shooting, was released from custody in April 2015.

On Monday, a panel of the 9th US Circuit Court of Appeals affirmed the district court's 2017 dismissal of the family's claims.

"As the main opinion properly acknowledges, the events underlying this case are tragic," the court filing states. "And some of Plaintiffs' claims remain to be litigated in the district court. We hold only that, under California law, the state officials are immune from suit."

San Francisco is a so-called sanctuary city, a term used to describe cities that in some way do not cooperate with federal immigration enforcement.

Steinle, a 32-year-old medical device sales representative, was walking with her father and a friend on San Francisco's Pier 14 when a bullet tore through her abdominal aorta, authorities said.

Surveillance video showed Garcia Zarate running away. Prosecutors later said gun residue was found on his right hand and argued he had been playing his own "secret version of Russian roulette" and fired into the crowd.

His defense attorney had argued the shooting was accidental and the bullet bounced off the ground and flew across 80 feet before hitting Steinle.

The jury acquitted Garcia Zarate of murder and involuntary manslaughter charges, as well as assault with a deadly weapon.

He was convicted on a lesser charge of being a felon in possession of a firearm and sentenced to three years in prison.

He had been deported five times

Garcia Zarate was no stranger to US authorities before the shooting. He had previously been deported five times and was wanted for a sixth deportation on drug-related felonies.

In their lawsuit, Steinle's parents said their daughter's death was set in motion by a March 2015 memo issued by the city's former sheriff which eliminated communication between jail staff and immigration authorities about undocumented immigrants. That policy was in "direct contravention" of federal and state laws, the lawsuit said.

A few weeks after the memo, Garcia Zarate was transported to San Francisco from a federal prison to appear in court on a bench warrant for marijuana possession and sales.

That drug case was dismissed and he was released from custody, despite a request from immigration officials to detain him.

The immigration debate was already a heated one across the nation in 2015, but few were talking about the term sanctuary city. When Steinle died, Google searches for the term spiked.

President Trump and ICE officials used the case to decry sanctuary city policies and promote the construction of a border wall.

"This senseless and totally preventable act of violence committed by an illegal immigrant is yet another example of why we must secure our border immediately," Trump has said of Steinle's death.

"San Francisco's policy of refusing to honor ICE detainers is a blatant threat to public safety and undermines the rule of law," Tom Homan, deputy director of ICE, had said in a statement.

In 2016, ICE, in a statement, said that agency director Sarah Saldaña had met with members of the Steinle family "to express the agency's profound sympathy for their loss and assert the agency's continued commitment to working cooperatively with law enforcement in California and nationwide to promote our shared goals of protecting communities and upholding public safety."

Garcia Zarate remains jailed as he awaits possible federal prosecution, the San Francisco Chronicle reported last month. US officials have said that he will be deported.